To more than 500 Hockey Kids Facebook-Fans!

Time to make a short review of the past... especially for all our foreign Followers! It seems that we all are united by our love and passion to play or watch HOCKEY - even though some of you don`t speak a single word of German :) That`s fantastic!!!
So... let`s start and have a look on my little retrospective tour. Are you ready?!
A children`s book that makes kids loving Hockey, that was my first idea, after having written my other books. This idea became more and more reality not least with the support of Chris Faust, who was of course immediately enthusiastic since I had told him about my project :)

The Hockey Kids were born and followed me around-the-clock & everywhere :) Finally, after some very busy months, I was eased by finishing the last chapter and the final illustrations of Lena, Max and Lars. Then, one sunny Saturday morning on July 2014, these three little heroes did their first steps into the public: Introduced by their publisher - who has changed 2016 into a lovely new one - and on their own Facebook Page, they won easily the hearts of over 100 Fans in only a few hours! 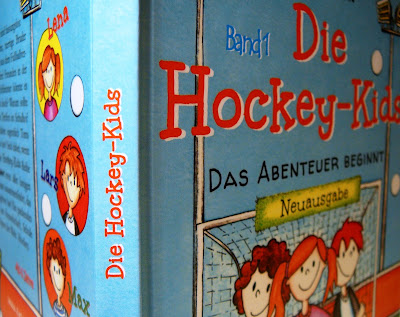 Thanks to all of you! I will soon prepare a new blog post in English with a brief summary of this lovely children`s book. In the meantime (an English version is in work :) , there are a lot of pictures and videos for you to be discovered on my sites... Have a great time!
Eingestellt von Unknown am Dienstag, August 26, 2014